The charter yacht DREAMING ON, an owner-operated 47-foot Leopard catamaran, reminds us that they are available for summer yacht charters in the VIRGIN ISLANDS through August 30, 2012.

The catamaran Dreaming On is fully air conditioned and accommodates up to six guests in three cabins, each having Queen-sized berths, flatscreen TV/DVD, and of course, private ensuite head/shower. The cockpit offers plenty of room for lounging and dining.

Children aged 10 years or younger sail for FREE on 7-night or longer charter! (Limit of one free child per charter)

The charter yacht SUBLIME, an owner-operated, 72-foot Irwin ketch that offers scuba diving in the Virgin Islands, still has some open dates for this summer... PLUS they have a special offer for charters taking place this fall! Read on... 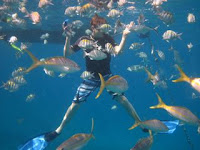 DIVING: Up to 10 dives/week with gear, is included in Sublime's charter fee for certified & non-certified divers. Learn to scuba dive. Brian is a dive instructor and instruction is also included, just do your bookwork before your charter.

Boredom is not an option...


SUBLIME is already booked for CHRISTMAS and NEW YEARS
Sorry

Vince & Linda, owner-operators of the charter yacht Drumbeat, have a special offer for October 2012. 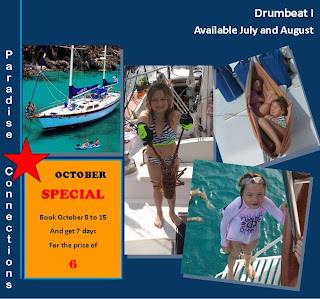 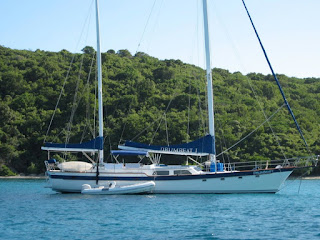 Drumbeat is a 72-foot Irwin ketch with a crew of three, owned and operated by Vince & Linda, and assisted by Kirk, a longtime crew member. Drumbeat is fully air conditioned and accommodates up to 8 guests in 4 equivalent double cabins, each with private ensuite head/shower.

A great choice for families, group of friends, and honeymooners too!

Vince is a dive instructor and includes diving for both certified and non-certified divers.

Read COMMENTS from a recent charterer we had aboard Drumbeat twice within one year... Once with his family and once with another couple to celebrate their retirement. Click here.

And I must include an older post with photos that Linda took when dolphins visited them at anchor. 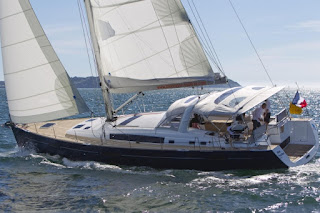 Greg is a Dive Master and offers 6 dives/week for certified divers. Divers may bring their own gear or rent (BVI prices about $140/wk/diver) and pay for air fills (approx. $6/tank in BVIs). Prices may vary for down-island charters.

Blue Passion is a 58-foot Beneteau (Oceanis 58) sloop with an owner-operator crew of two. Blue Passion is fully air conditioned and accommodates up to 8 guests in 4 cabins, each with private, ensuite heads/showers. The aft, starboard guest cabin can be either a queen or split into twins (see layout diagram in the yacht's online brochure).


BLUE PASSION is already booked for CHRISTMAS  and NEW YEARS

The charter yacht Nauticat of Fowey, a 47-foot Leopard catamaran, announces a special offer for newly booked charters taking place between now and July 12, 2012 in the Grenadines. 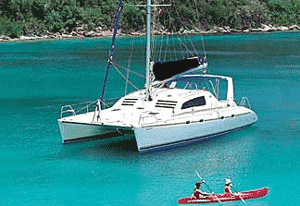 Bill & Ali of Nauticat of Fowey has a summer super saver special for you:


Right now is a great time to be in the Grenadines - the seas are calm, the winds are steady, the sun is shining and we have had some great sailing in both directions up and down the Grenadines.

The anchorages are not busy, so for people wanting a great, last minute, peaceful getaway to see the REAL caribbean with fabulous food and a great crew who will spoil you and show you all the best experiences, now is the time to take advantage of our special June/July offers.

Guests should fly to Barbados and then take Liat Airlines to St Vincent or Grenada or SVG Air to Bequia, Canouan or Union to start in the heart of the Grenadines. In most cases you can be here within one day from the US or Canada and, with our FREE sleep-aboard night, your holiday starts right away.

Grenadines half board package: Includes standard ship's bar, breakfast, 5 lunches and 4 dinners aboard Nauticat of Fowey

Eating out in the Grenadines is not expensive and this package enables guests to experience some of the real Caribbean and puts something back into the local community! In the Tobago Cays, we not only recommend the beach BBQ experience at $40 per head, we even throw iin the booze!!!


Ali and Bill, Nauticat of Fowey

Nauticat of Fowey is a a 47-foot Leopard catamaran with a crew of two (owner-operators). Nauticat is fully air conditioned and accommodates up to 6 guests in 3 cabins, each with Queen berth and ensuite head/shower. Nauticat has a 12-foot dinghy with 25HP motor, tube, 2-person kayak, snorkel gear, TV/DVD in salon, portable DVD player, iPod, Kindle with many eBooks, etc.

Looking forward to your inquiries !

NAUTICAT is currently available for CHRISTMAS  and NEW YEARS
It's not too early... Book NOW!

Charter yacht SPIIP, an 86-foot CNB sloop, will be available in the South Pacific for sailing vacations in French Polynesia this summer. 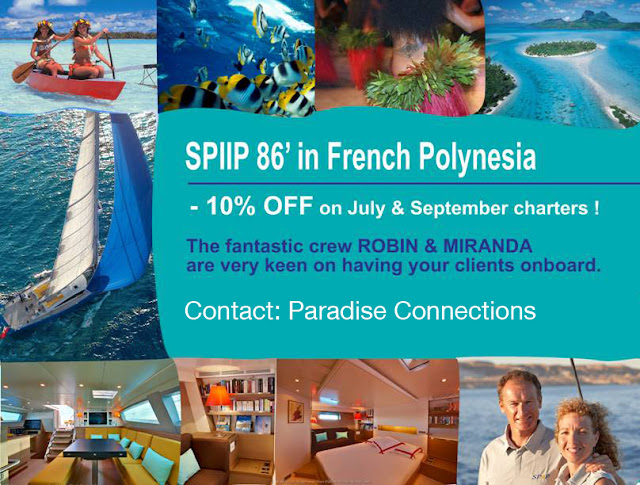 The charter yacht SPIIP is offering 10% off their normal rates for yacht charters in French Polynesia taking place in July and September 2012.

SPIIP is an 86-foot CNB sloop designed by Philippe Briand, with a crew of three. SPIIP is fully air conditioned and accommodates up to 6 guests in 3 cabins, each with ensuite heads.

We would like to share comments that the charter yacht GOOD MEDICINE, a 46-foot Fontaine-Pajot catamaran, received from recent charter guests. 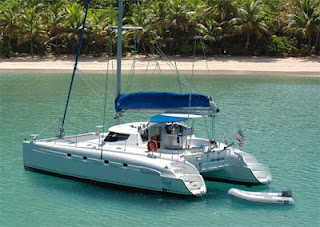 "The comfort and condition of Good Medicine is a direct reflection of Bob and Sueno, excellent, fabulous and what a charming couple. We love these two people, Captain Bob was always making sure we were happy, we loved his sense of humor, Sueno is a wiz-kid in the kitchen-galley, presentation of her meals, the taste of each meal was exactly what we love, love, love. Our week with them went far too fast, but it was exactly what we needed, it was far better than anything we anticipated. Thank you guys for everything."

Good Medicine is a 46-foot Fontaine Pajot catamaran with a crew of two. Good Medicine is fully air conditioned and  accommodates up to six guests in three cabins, each with Queen berths and ensuite head/shower, plus they can accommodate two children in the salon or the single cabins in the "forepaws". Good Medicine has a 12-foot dinghy with 30HP motor, tube, kneeboard, wakeboard, two-person kayak, snorkel gear, floating mats, hammock, TV/DVD in salon, etc.

Yesterday, Captain Bob Daigle of the charter yacht SILVER MOON, a 44-foot Voyage catamaran, wrote to let us know that they have safely arrived in New England and are ready for summer charters. 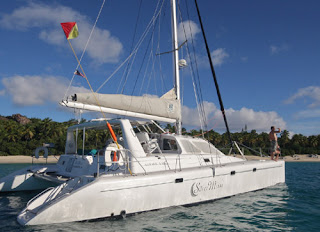 Here's what Capt. Bob has to say:

Silver Moon, a fully crewed Voyage 440 Catamaran based in St. Thomas, USVI has just completed a journey from the Virgin Islands to Newport, Rhode Island, making a quick stop in Bermuda along the way.  The passage from St. Thomas to Bermuda took the boat to Puerto Rico and then north to Bermuda.  From Bermuda we sailed the rhumb line across the Gulf Stream and then to Newport, Rhode Island. 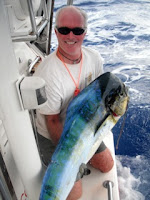 Over the course of the voyage we experienced some terrific sailing conditions, as well as some rough weather and seas particularly during the passage from Puerto Rico to Bermuda. The stop in Bermuda allowed the crew to get some sail repairs made, as well as replenish the boat with water, fuel and provisions.  The 620-mile passage from Bermuda to Rhode Island was completed in slightly less than four days, a personal record for the crew of Captain Bob and owners Captain Joel, Bev & family who have all sailed this same passage many times. Bob caught a 25-pound Bull Mahi the second day outside of Bermuda which provided two great tasting dinners for the crew of six.

Silver Moon is now located in Narragansett Bay, ready for taking guests aboard to visit the many beautiful islands and shoreside festivals occurring in New England this summer. The boat will remain in the Newport, RI / Buzzards Bay area for June and July and likely make its way up to Maine during August.  In early October the boat will sail south back to St. Thomas via the Intercoastal Waterway, arriving in Red Hook, St. Thomas late October -- ready for the 2012-13 charter season in the Virgin Islands.  [Silver Moon already has a Paradise Connections' charter in early November!] 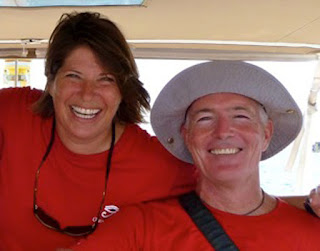 Local knowledge abounds as Maggie and Bob were born and bred in New England, sailing and racing in this area roughly about the same time they learned to walk. You'll be in good hands! 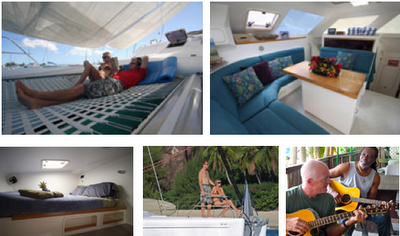