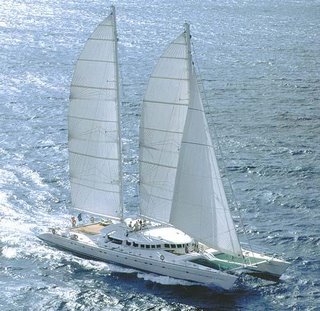 Join the 138-foot catamaran, Douce France, on her world tour.

DOUCE FRANCE offers flexible accommodations for up to 12 guests in six identical en suite cabins, convertible from two twin beds to one king. The attention of her international, professional crew of 8, including a scuba instructor, ensures your charter will be most memorable. The 250 bottle cave à vin of select wines will please the most discerning guest and compliment the French chef's culinary skill. An atmosphere of luxury and elegant décor, surrounded by a world of beauty and adventure.
Click HERE for their electronic brochure. Brochure #2. Brochure #3.

Rates, locations, and availability subject to change.
Posted by All the best! at Friday, July 28, 2006
Newer Post Older Post Home