Randy & Shelly wrote to us yesterday with a few interesting bits and pieces... 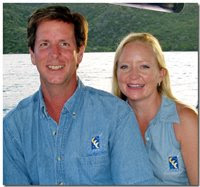 Three Moons, their 72/65-foot Irwin charter yacht, has been hauled out in Virgin Gorda for HER summer vacation. "Even after many haul outs over the years, we never get used to the strange sight of our home up in the lift straps traveling slowly down the road in the boat yard! It's a bit like taking the "Big Top" down at the circus which culminates with a big party at the end of the day!" 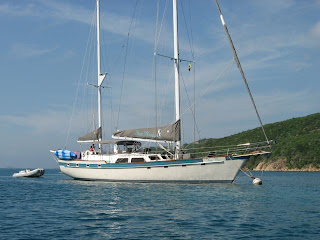 They also gave us an update on what their past crew are up to! "Most of them work for us at least two years. Yes, they move on to other things and new lives as time goes by. Every one of these gals became a part of our family. We've joked many times that we don't have kids; but we really do!"

Shauna Kuhn returned stateside to earn her masters degree in Environmental Studies and now works at Stony Brook University as a research technician. She's happily involved in a oyster restoration project in the Hudson River, Manhattan, New Jersey, Jamaica Bay (Queens, NY) and Shelter Island (eastern end of Long Island). The goal of her team's project is to figure out where, if any place, they can restore the over harvested oyster population.

We all love Meredith "Mini-Moon" Hester and still see her often in St. Thomas!
Mere and her husband Jonny (captain of charter yacht Conundrum) have just announced that they are going to be parents in late December! We are so excited for both of them!

Katy Bednar was in St.Thomas last month to visit the "love of her life" and celebrate her birthday. She returned to Boston last fall and is doing well at Boston University studying dentistry. She's already interning; but says they won't let her do the fun stuff yet! Six years of dental school is a long time!

Becca Lee will be happily working with her new boyfriend next season aboard a 90' power yacht. We wish them both many great adventures and much happiness together!

Three Moons will begin their new season in November 2009. They are booked for New Years, but available through December 26th for a Christmas charter!

Have a fun summer Shelly & Randy. See you in November!