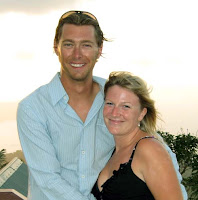 We are sad to announce that Ian & Polly will be leaving the popular charter catamaran REACTION. But, we are happy that they will be crewing another catamaran that Paradise Connections represents, the 60-foot Privilege, Sagaponack, which will be chartering in the Mediterranean this summer and returning to the Caribbean for the winter 2010/11 season.

Ian & Polly would like to introduce Reaction's new crew:


We are delighted to introduce you to the new crew of Reaction who will be taking over on April 19, 2010, Shaun Miller and Kelsey Van Beever. They are a lovely young couple who are extremely well suited to Reaction in terms of their energy and enthusiasm for the job and their caring attitude towards their guests. They are both divers and love the outdoors. They both come from big sailing families (Shaun's brother runs a charter cat and Kelsey comes from Antigua) and have had a lot of experience in the yacht industry. Shaun and Kelsey are great crew and we are certain that they will be able to fill our shoes with no problem at all.

A bit more about Shaun & Kelsey from the crew's profile:

Shaun's passion for sailing began during his childhood in the beautiful oceanside city of Durban, South Africa. As a child, he took advantage of every opportunity he could to be on the water -- from dinghy racing in school, to keelboat racing at the weekends, and deliveries up and down the coast of South Africa. After spending 2 years abroad, he could no longer resist the pull of the ocean and began his career as a professional captain in the charter industry. Since then, he has travelled everywhere from the east coast of the United States, to the Caribbean, and the Mediterranean.  Shaun's love of boats, however, is not just in sailing -- he also spent some time working as a boatbuilder in Antigua, which has given him an in-depth knowledge of the finer points of a yacht and how to keep it looking its best. Shaun is an MCA commercially endorsed Yachtmaster and is a PADI Dive Master.

Kelsey, born and raised in Antigua, one of the Caribbean's most prominent yacht havens, is no stranger to the industry. Her grandfather, Desmond Nicholson, sailed from England to Antigua with his family at the end of the Second World War and was a pioneer of the charter yacht industry. Growing up on a Caribbean island, Kelsey was lucky enough to spend as much time in the water as out, and has been swimming and sailing for as long as she can remember. After working as a sushi chef on land, a charter chef on daysail yachts, and even as a snorkel guide in Alaska, it was a natural progression for Kelsey when she met Shaun to work together with him as chef/first mate of a charter yacht.  Kelsey's passion for cooking began during her childhood and has developed into a profession over the last five years. Kelsey takes pride in preparing her food that is as beautiful as it is delicious and specializes in seafood and Caribbean-style cooking -- lots of color and lots of flavor.

Together, Shaun and Kelsey make an exceptionally enthusiastic and upbeat team.  Shaun is always happy to let you take a turn at the helm and try your hand at sailing. He loves to show people his favorite snorkeling spots.  And, after a day of fun in the sun, sit back and relax with one of Shaun's signature captain's cocktails with a delicous appetizer from Kelsey's galley.

Whether you want an action-packed adventure or a relaxing break from daily life, a trip aboard Reaction with Shaun & Kelsey will be the vacation of a lifetime!